This author has not yet filled in any details.
So far KCFH Admin has created 11 blog entries. 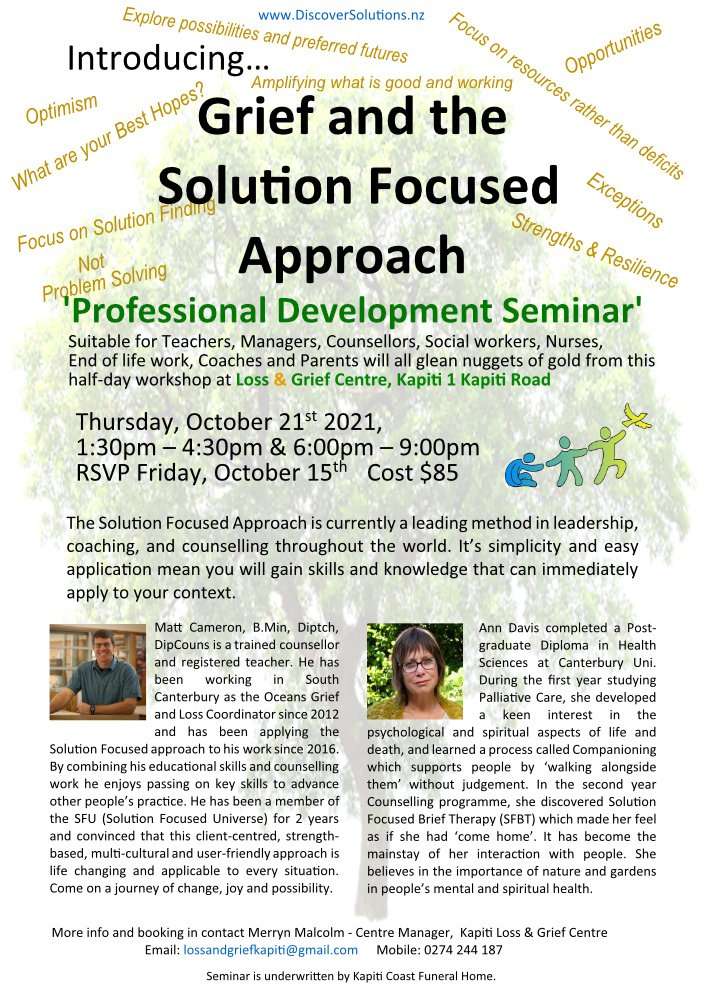 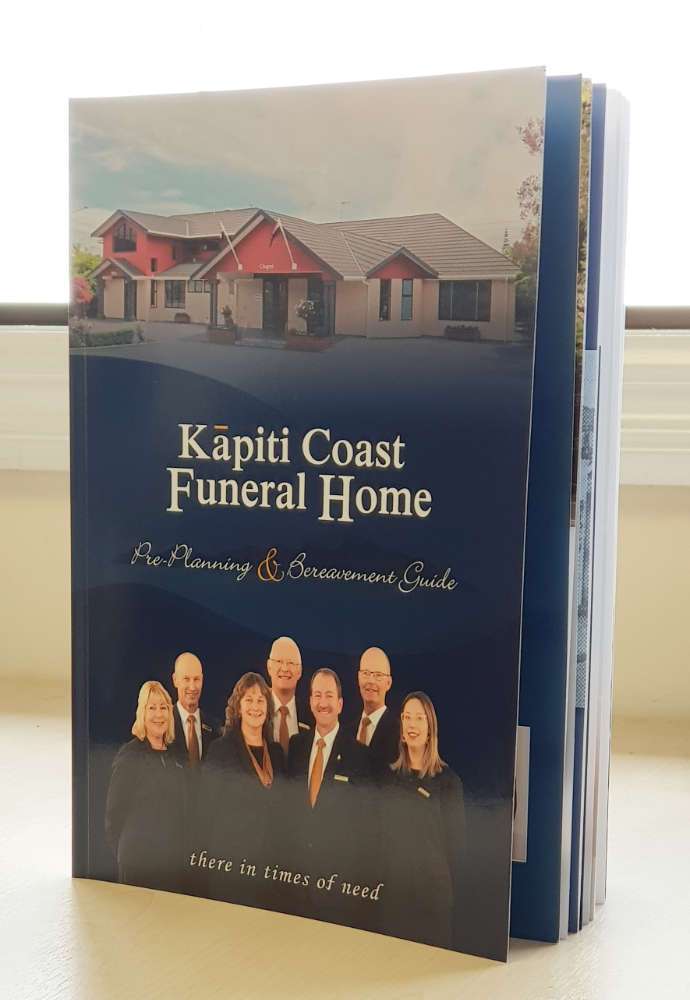 After a year of planning our 35-page book in the form of a high-quality Magazine has arrived from the printer and is free to anyone interested.
This booklet took many hours of writing to ensure it is full of factual and helpful information to assist and guide you, including:
History of Funeral Home site over 30 years; Standards Quality Care statement;  Current facilities and Services; chapels and crematorium

This is a full gloss magazine in A4, easy to follow and of high quality.

We are so pleased to offer this comprehensive information magazine to our local community, all free of charge. If you wish avail yourself of a copy, please feel free to drop into the Funeral Home, just over the railway line on the corner of Kapiti Road and Hinemoa Street, Paraparaumu during office hours.
For a free electronic copy go to www.kapiticoastfuneralhome.co.nz/preplanning/funeral-guide-book/

What sets Us Apart – Flexible Spaces

Our main chapel at Kapiti Coast Funeral Home has been designed in such a way that the furniture can be easily moved and changed around. Whether it is to maximise the space to fit 100+ attendees in a more formal set up or expanding the chapel size by opening the bi-fold doors that can then be set up with another 100 chairs allowing the space to accommodate 200 people or the opposite where removing a lot of the chairs out and creating a small semi-circle to give an intimate feel for a smaller more intimate group of 25 – 30.
Having separate chairs that can be repositioned easily is a real positive and sets us apart from chapels that have fixed pews. Having movable chairs also gives room for artistic licence for a family when wanting to personalise the space.
Live streaming is free when our chapel is used, and even with moving the seating around it still operates well. We have cameras on both sides of the chapel, and that can both ‘Pan’ and ‘Zoom’ and easily provide a great vantage point. Having items in the chapel to personalise the ‘space’ provided is also encouraged and we love to see artwork, quilting, sports equipment in fact almost anything on displayed to help give our space the feel of your space when honouring a life well-lived.
We pride ourselves in providing versatility, flexibility, and personalisation for the families we serve, and our chapel flexibility is another thing that helps set us apart. 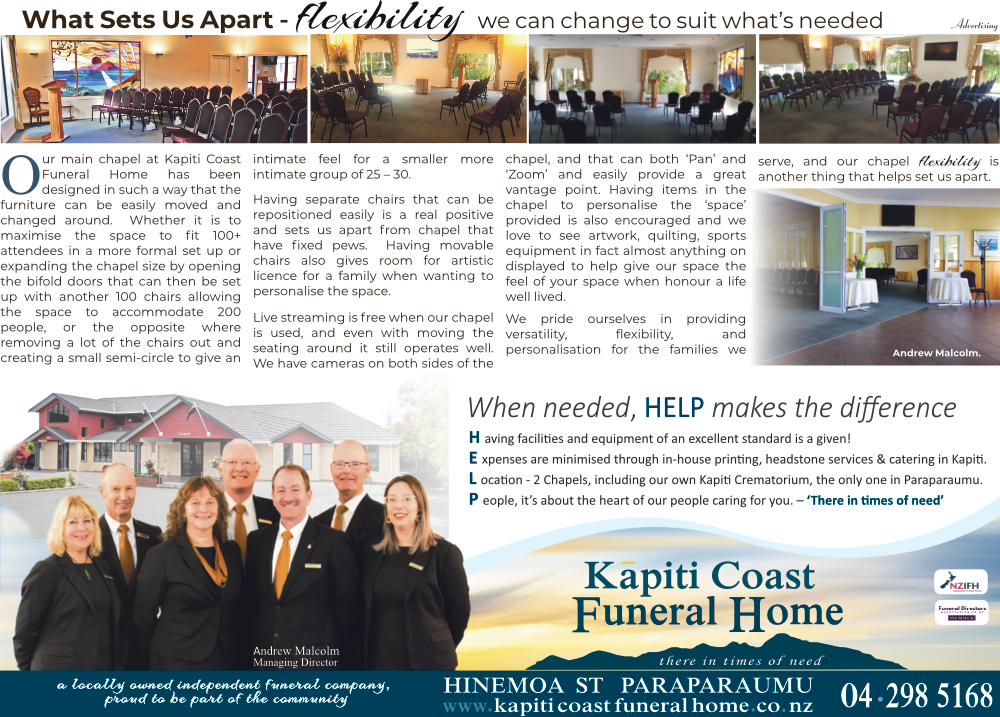 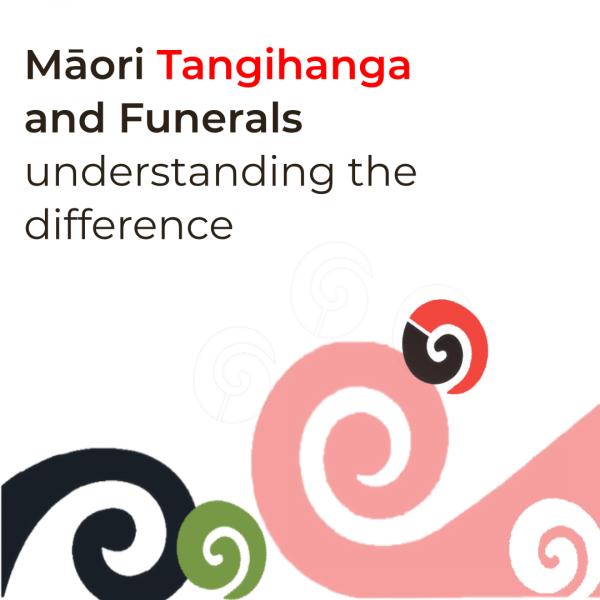 In recognition of Te Wiki o te Reo Māori (Māori Language week) I thought it would be good to raise awareness of Māori Tangihanga (Funeral processes) and give a bit of reflection on how we have learned and continue to learn from each other.
In my role as a national tutor in Funeral Services (1992 and 1993), I taught on Māori Tangihanga and thought I should ask the experts to help, so I invited several Kaumātua from different Marae to speak to the students. This gave them (and me) a real insight into Māori Tangihanga universal practices but also some of the variations from region to region and tribe to tribe.
I have owned Kapiti Coast Funeral Home since 1992 and am now in my 38th years as a Funeral Director. During this time I have seen and been involved with many Tangihanga (Funeral processes) and attended many Tangi (Funerals). In witnessing many lovely ceremonial processes I have found some Māori Tangihanga to be universal which include:

• Staying with the Tupapaku (deceased body)
• Dressing the Tupapaku
• Having the Tupapaku on the Marae
• Casket open for visitors to pay respects
• Three days of mourning
• No food near the Tupapaku
• Transporting the Tupapaku for burial on their ‘Home’ Marae
• Manakitanga, (hard to interpret but sort of ‘very generous hosting’, including food and gifts)
There are lots of additional processes that seem to change between tribal groups and even Marae within the tribal groups, such as:
Some will not travel after dark, some will.
• Some only allow males to speak on the Marae, other Marae have few or no restrictions.
• Some will close the casket on the 3rd day of mourning ‘before sunrise’ where others will close the casket at the start of the final farewell service.
• (There are many other variations)

Today for both Māori and non-Māori there is a blending of many traditions. An example of this is taking the Tupapaku to the residential home. Before the European settlers arrived the Māori only took their Tupapaku to the Marae, usually only onto the Meetinghouse porch. They did not take them home to their own Whare (House). Early settler Europeans took their deceased to their own houses which followed their homeland traditions. The Irish took the deceased home for a ‘Wake’ and the English took their deceased home to the front room, known as a ‘Parlor’. This is where the old phrase ‘Funeral Parlor’ came from.
In more modern times Māori tangihanga often includes inter-cultural practices such as the use of a funeral home chapel, the inclusion of photo slide shows and other audiovisual tributes, and the printing of service sheets.
Where Māori culture teaches us all so much about good grief, it also has adopted some of the better European ideas. I think it is important to acknowledge both Tangata Whenua and Tangata Tiriti (People of the Treaty) who have adopted practices from each other for ‘good grief’ and honouring loved ones’ lives. Mahi ngatahi (working together) for a better ‘Aotearoa
New Zealand’. Kia ora.

We have been working incredibly hard to enable grieving families to have meaningful farewells during the weeks of Covid level restrictions. Every few days the goalposts have changed, but at level 2 it has been a little less restrictive and now with at least another week in level 2 we are seeing even more easing of conditions. This last week has seen us be able to host 50 people as a maximum in our chapel, along with our catering lounge seating 50 people at tables for eating and drinking. Having the flexibility with individual chairs means we can socially distance those present, allowing family bubbles to pull chairs together in the chapel. Afterward, our catering staff has been able to serve separately plated food to each person from behind per-specs screens at our servery, very much like a café, and from a separate window receive their ordered beverages. Attendees have enjoyed being seated café style and one of the lesser restrictions has seen them now allowed to sit in groups of 10, while not having to wear masks when eating and drinking, all seated of course. – For those that are not aware of the limitations that are placed on us by Government directive, they are now as follows:
Delta Alert Level 2 — It is mandatory to:
• Scan NZ COVID Tracer QR code, or sign the register as you enter
• Allow only 50 people indoors or allow only 100 people outdoors.
• Physical distance.
• Avoid harirū, hongi, kissing, and hugging.
• Maintain a two-meter distance between household bubbles.
• Wearing a face mask is recommended but no longer mandatory at a Funeral Home.
To overcome the Funeral gatherings with more than the 50 allowed we have utilised our second function space “Kapiti Old Mill’, which is just across the road from Kapiti Coast Funeral Home at 1 Kapiti Road. The directives require any secondary space to have its own separate QR code and this next-door facility complies nicely. Those attending there do not need to move their cars as it’s just across the road. They watch the gathering via ‘live stream’ on our big screen and then gather outside watching as the family gather around the hearse from across the street. Though they would rather be in the same venue, it is a way of keeping people connected, and nice to be able to provide ‘some’ freedom in our farewells.
Andrew Malcolm. 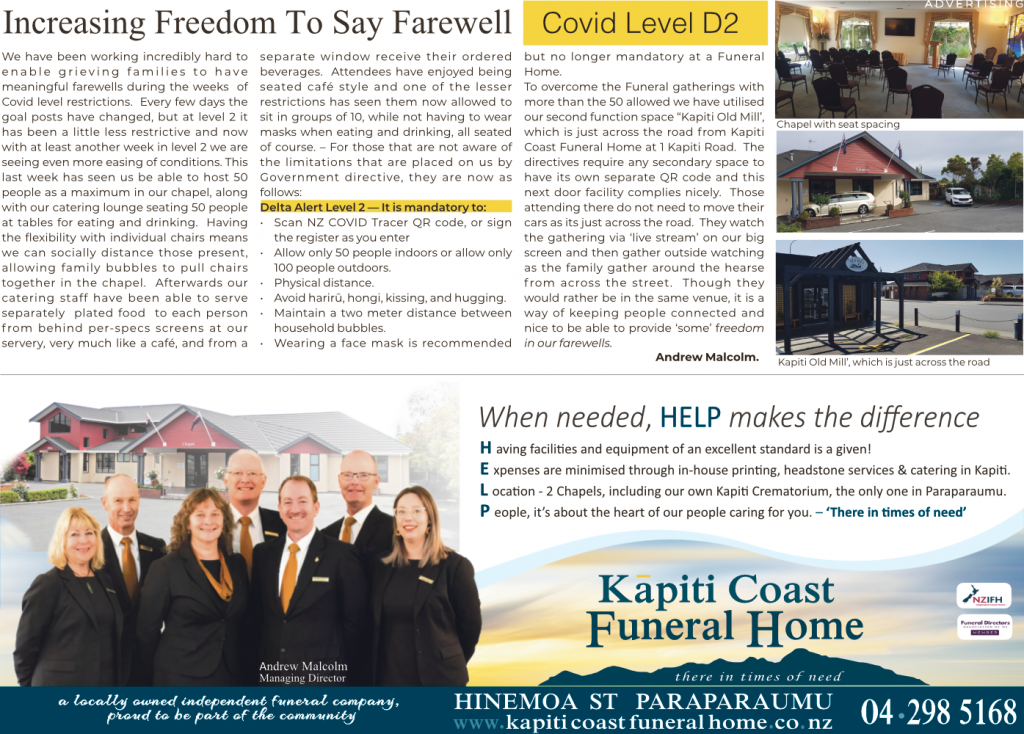 Providing Support When You Don’t Know How To Grieve

As essential workers there was no rest for us during the lockdown. With the Funeral restrictions, we were concerned about how we would care for our client families. As a team we rallied together and came up with things, WE CAN DO, rather than just focus on ‘what we couldn’t do’.